All the Pertinent Stuff

First, the business. My phone has problems when I try to approve comments here on blogger. Gets stuck in some weird google accounts loop and I've had to unistall and reinstall blogger. But to have it continue to happen is a pain. So if you make a comment, but don't see it posted here right away, I've read it, but haven't been able to approve it. How stupid is this.

Now on to the fun stuff. 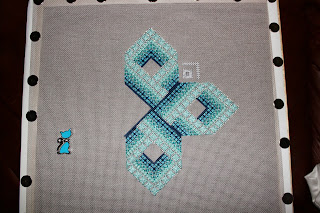 This is Ghordian Knot, an ANG Group Correspondence Course. I may have tweaked the colors a bit. It needs to be completed by the end of November. Do I have a chance? Maybe. After I get that fourth quadrant in, it's all pulled work. You can see I started a little bit already. Because I'm tired of doing the same thing.

Seriously, I love this design. I love these colors. I'm bored out of mind stitching on this.

It's not the design. It's me. Maybe I need to put down the charted canvas for a while.

If it wasn't a Group Course that I'm working on along with some friends, I'd probably have set this aside by now. I do intend to finish it. In fact, it may be the only thing I'm working on in November. LOL 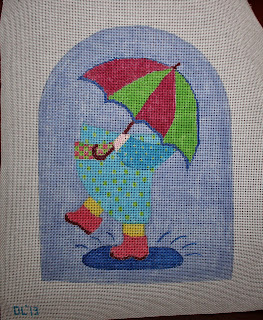 Another class piece. This one though is slightly different. I took an online class with Janet Perry on creating stitch guides. Somehow, some of us rolled that on into a class on painting your own canvas. We all started with the same line drawing of the girl and umbrella. And now we're starting to see the painted canvases. I used Copic markers on this instead of paint - a further expirement on my part. They work well, but you have to be careful as they do want to run across the canvas threads.

I don't think I'll give up my paints for markers as on the advice of my boss I checked the colorfastness of the markers. I had a spare piece of canvas with a small square of each of the colors on it. With room temperature water, everything was fine. Then I tried saturing the canvas with hot water. This time one or more of the pinks gave off a tiny bit of color. In the world of needlepoint, this is bad. No steam blocking for this piece. 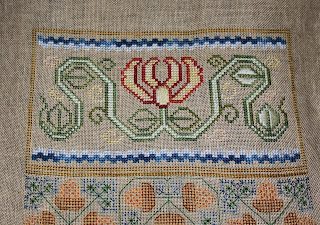 Lest you think I'm all canvas and no linen, here's where I'm at on my Loudoun Sampler Guild Mystery piece. This is the 6th band on my piece. I'm not quite finished yet as I need to complete the satin stitching. And I decided to add my granddaughter's initials to this piece as this is the band I was working on the month she was born. 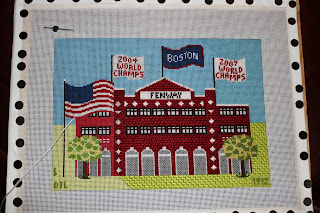 Finally we have my Fenway canvas. I said I wanted it by the end of the World Series. That deadline is fast approaching. I'm taking this piece with me to Seminar because I've got lots of boring sky to do that I only need half a brain engaged to stitch it. Seminar has a way of sapping your abilities by the end of the week. You pretty much have to alert and attentive all day in class and that exhausting.

That's pretty much where things stand right now. I'll be on my way to Kentucky next week. Driving with a friend. We're going to have so much fun!!!
Posted by Donna at 4:46 PM 3 comments:

I feel like I've slipped off the edge here. But I've been busy.

I'm getting ready to leave for EGA National Seminar next week.

I'll try to post some progress photos before then, but it's hectic time at my house.
Posted by Donna at 3:53 PM 1 comment:

Sugar Pie at four days old. It was hard to leave her and come back home. 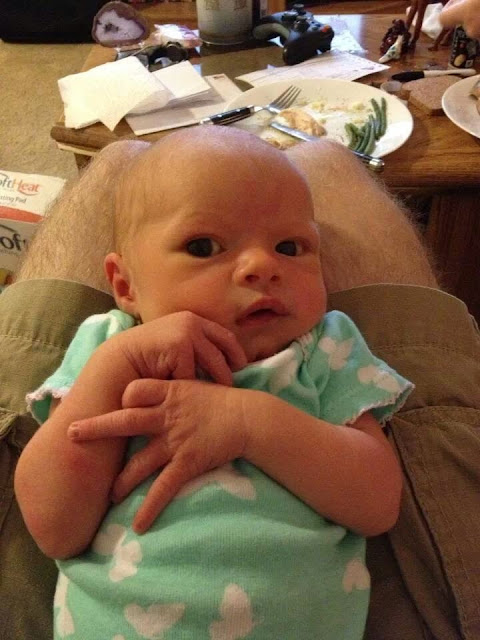 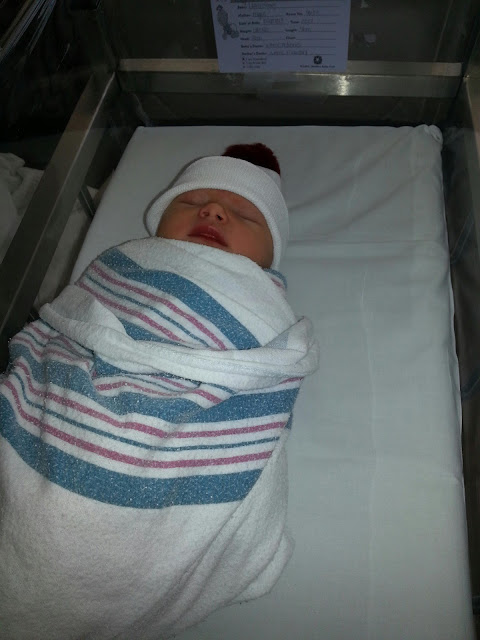 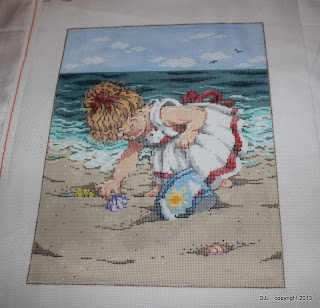 If all goes according to plan, our granddaughter will be born today.

Yes. I am excited. And a little bit anxious. We'll be heading off to see her and her new parents tomorrow.

It's a strange and exciting time for all of us!

Ten years have passed since that first blog post dated 9/3/03.

Here it is in its entirety:

A new month and a new adventure. Brought here by my habit of lurking on RCTN. It's a gray and dreary day, not conducive to stitching at all. Even the cats have gone back to sleep and it's only 8:32 a.m.

As for the stitching, I am all encompassing. There is little that I won't (or haven't) attempt(ed) at least once. But samplers are a big passion. I am committed right now to my Agnes Scott sampler and should try to make some progress if I can get out of today's funk. I would like to finish my current band by next week's EGA meeting.


That's it. I did finish Agnes Scott, but not in '03. I think it was '05. Anyway, she was finished and I love looking at her at dinnertime.

There are not many things I've stuck with for ten years in a row. On my one year blogoversary in 2004, I didn't even know to acknowledge that a year had passed. I was writing about procrastination - a problem that is still with me today. (Notice, though, that I didn't procrastinate this post.)

I did not post on September 3, 2005. The closest post came nearly one week later. We had moved that summer and I was busy painting and getting my daughter off to college and then Hurricaine Katrina happened. But later that month I went to my first EGA Chapter meeting here in virginia and look, eight years later I am the President of that Chapter.

On September 3, 2006, I still didn't acknowledge my blog's beginnings. Instead I was writing about making my own padded headboard. Which I am considering recovering.

In 2007, I noted my blogoversary a day late. On the third, I was counting my UFOs which numbered 37. Right now, I do not dare count my UFOs. No. I dare not. Here's what I wrote on the 4th:
Yesterday was the four year anniversary of my first post. Today is post number 802. I know my posting goes in spurts - I bop along posting consistently then something happens IRL and I stop for a week or so. Still, 4 years and 800 posts. I did manage to stick with this whole blogging enterprise fairly well.

In 2008, I forgot again. Instead we have:  I seem to have misplaced my stitching mojo again. But will search for it today. I think I had car lag. I did accomplish things, but picking up a needle just didn't seem like the thing to do.

I did laundry and changed the sheets. Straightened DD's room just a little. (Note to her: I had to create access to the window for Zoe.) Vacuumed. More laundry and now I'm all caught up. Picked up dry cleaning. Stopped at Michael's and remembered why I haven't yet framed those two photos of bluebirds in the hills of Tennessee - because they are an odd size. Watered the plants. Cleaned the bird bath. Made two new recipes for dinner. Did the dishes. All the usual stuff.

For dinner I made grilled salmon with cucumber salsa. And creamy grits with sweet corn. I have no problem admitting that this was the first time in my life that I have ever cooked grits. One bite and DH said this is what he wants next time he gets sick. What I think we have here is a comfort food.

And smooches to my honey. Today is the first day of his new job. He's back in the employ of the federal government. Now, go kick some ass.

But I did remember 10 days later because Dani wrote about her 5th blogoversary.

On Sept 3, 2009, I was busy picking out stitching to take on vacation with me as we were heading to the Outer Banks. Completely spaced on the time of year.

In 2010, I remembered early and followed up later with a giveaway. Not something I've done a lot of. But I do have some things to giveaway here. Which I will post later this week.

My first post in September of 2011 is dated the 5th. I had a cold and was packing to attend my first ever EGA National Seminar. And here I am getting ready to go for the third time. I'm going with a friend who will attending her first seminar. It's going to be a blast!

And last year I apparently totally punted on the whole idea of acknowledging how long I have been writing here.

Let's see where I stand today. I don't blog as often as I used to. Part of that is the Smartphone. I don't have to get on the computer. And though I can blog from my phone, it's a pain to write anything longer than a couple of paragraphs.

My intentions are to continue blogging. I'm not stopping now. Though I have considered taking my blog to facebook. It's a lot easier to add photos and have discussions there. For right now, things remain as they are.

Thanks for reading and commenting and in general being my virtual stitching friends! It's always nice to know I'm not alone in my obsessions.