March in northern Virginia means it's time for the Woodlawn Needlework Show. I had entered two pieces. More on those later. First, let's talk about demonstrating at Woodlawn.

They ask demonstrators to pick a technique to highlight. And I knew my studio was a disaster (still is) so I chose something I knew I could pull together quickly, my miniature stitching, or whatever you want to call silk gauze and stitching over one.

My first formal needlework classes were in the 90s at the Spirit of Cross Stitch in Sacramento. I took an over one on 32ct linen lily class with Maureen Appleton, the queen of over one stitching. Finished the piece maybe 10 years later, but I've purchased and stitched (and collected) many of her kits.

My second class was a silk gauze bluebird with Paula of Crossed Wing. I finished that one right away and gave it as a gift. Again, I became a big fan of her silk gauze kits and stitched many pins and porcelain boxes as presents. That photo is one I'm finally stitching for myself.

I knew I'd be upstairs at Woodlawn in a room with brilliant sunshine. So I didn't bring a magnifier or light. But I did bring this Charland Designs Irish Sampler for my afternoon stitching as the sun eventually moves on. It's always been a pleasure to stitch in public at Woodlawn and chat with those touring the show. Many are stitchers, but a lot aren't. It's an opportunity to educate and just hang out in a beautiful space doing something I love to do.
Posted by Donna at 5:55 PM No comments:

Next admire the teacher's piece. Again and again.

This class involved us stitching on different projects. Which was fantastic to see different pieces being created.

Next. Thread up a beading needle and get to work. This will be a long term project for me as other things have jumped ahead of it. But I love it. And even found more Tula Pink fabrics in other colors and patterns. Just in case I want to keep beading.
Posted by Donna at 5:30 PM No comments:

I finished my version of Ambrosia Honey. Obviously I changed the colors and I flipped the ribbon. I also didn't use a single bead. Instead I used Kreinik 1/16th ribbons.

Then I went and picked out some fabulous framing at Total Framing in Fairfax. 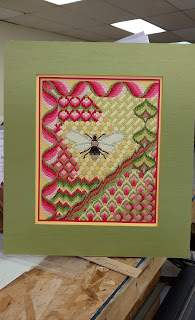 Pretty wonderful when your framer sends you a preview!

In Which I Attempt to Catch Up 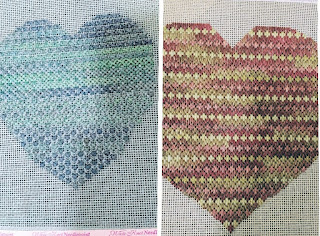 These are two hearts I stitched back in February for the Hearts for Hospice outreach project some guild chapters have been supporting.

Just some Watercolours, pearl cotton, and Kreinik braid from my stash. Our ANG stitched dozens of hearts.