So it's farewell cable. Hello, DirectTV.

Comcast actually sent me a reply trying to pacify me with Nats and O's games.

We need the Red Sox.

Soon we'll be listening to Jerry and Don on NESN and all will be right with our world.
Posted by Donna at 10:45 AM No comments:

My absolute first impression was that I was not impressed this year. It's not that there were no beautiful, amazing things. It was that there was little there that cried out to me.

For the first time ever I went with two friends who are also stitchers. Which was great.

The grand prize winner absolutely deserved to win. It was a sampler with blackwork and cutwork and a back that was virtually indistinguishable from the front.

And the people's choice award went to a piece offered as a group correspondence course offered by the EGA. I was amazed that enough people recognized the difficulty and beauty of this particular stumpwork project.

There was some amazing stitching by a person from Mongolia! The chain stitching on a blue satin purse was tiny and orderly it was hard to believe it was done by human hands.

Not a lot of goldwork. Not as many minatures as last year. Most of the samplers were of the Long Dog variety. (And someone entered a stamped sampler - which was done so well I had to get my face right up to it to notice it was stamped.)

But it was a gorgeous day out - temps reached the 80s. And we stopped by In Stitches and picked up a little thing or two. Honestly not much. I've been keeping myself well-supplied at the Scarlet Thread on Thursdays.
Posted by Donna at 7:39 AM No comments:

I'm going to the Woodlawn Needlework Show this morning with some stitching friends!

Off Topic from Stitching

But great news on the personal front.

DS has chosen the University of Mary Washington in Fredericksburg, VA.

And as an added bonus it's only an hour away by car, unless 95 has had a major meltdown - in which case, I already know the back way which is sligthly longer.

Can hardly believe that next year I'll have 2 children in college.
Posted by Donna at 8:42 AM No comments:

Flying right along on Poseidon.

Need to phake a toto and post it here of my progress.

(Darn you, Capitol Steps. Your Dirty Lies keeps intruding on my speech patterns - anyone remember Rindercella by Ray Stevens?)
Posted by Donna at 8:20 AM No comments:

DS woke up with some stomach bug yesterday. In my efforts to be quiet while he slept nearly all day, I did laundry and stitched on Poseidon. I finished all the seaweed "hair" on the right side. Just kind of got into a rhythm and my needle must have been smoking. Today I get to stitch with colors other than green!

Ms. Nicolletti did include a good tip from a fellow stitcher with the instructions. So I am using a yellow highlighter to highlight the part of the pattern I am currently working on. Then going over that with orange when I'm done. It is making things much easier to see on the graph.
Posted by Donna at 8:01 AM No comments: 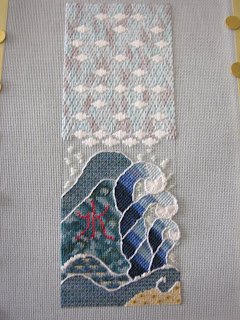 This is it stitched, but not assembled. The stitching will get folded in half horizontally. If you'd like info on this piece, it's a class being taught by Elaine Evans at the ANG National Seminar.
Link to info here: http://www.needlepoint.org/Seminar-07/classes/2day/23005.php
Posted by Donna at 10:28 AM 2 comments:

If you had $500 to spend on stitching-related items, what would you buy?

There's so much I don't need having a full and bountious stash. I think I'd go for classes at an EGA seminar.

Please. I'd like to sleep through the night. The throat thing is now moving down into the chest. Cough, cough. Ah misery.

Went to my LNS Thursday morning stitch-in and got in several solid hours of work. I may really hate the color green when this is finished. But so far I'm good. Bought the Crystal Lagoon fabric for Ocean's Daughter by Who Knew? It's very bright, but matches the Crescent Colours Bejeweled floss perfectly. This morning I think I'll see if there's enough fabric to stitch this twice. I'd love to surprise someone with a shop model. Only problem is - this fabric is 32 ct Belfast and once dyed, the fibers swell. The holes are not very obvious. Going to be some tight stitching.

Also bought Helen Stevens embroidery book about birds. I don't have all her books, but I've got several. It's a joy just to look at them. But I'd really like to try planning out a project based on her stuff.
Posted by Donna at 8:07 AM No comments:

over the weekend. Looks lovely. Now I need to do the finishing sometime before March 28th - the next EGA meeting. Still need to ask for permission to post a photo.

I still feel like crap. Oops. Maybe I didn't post here but DD left her spring break cold with me. This makes the 3rd major cold of the past 6 months. Not a happy camper.

Anyone know of any good sites dealing with lucet braiding?

Had our second plumbing disaster of the new year. This time it was under the kitchen sink. But yeah! My engineering hubby fixed it all up good as new. My hero!

And because I wanted to:

I started a new project on Monday. Lynne Nicollet's Poseidon which can be seen here:

I've had this for slightly over a year now and it was calling to me.
Posted by Donna at 7:54 AM No comments:

Now Why Was That So Hard?

Last June while in our pilot class for our Japanese Inro needlepoint piece, we all had difficulty when it came to doing the little section of sea grass. I remember doing the first two, frogging it because I didn't like how it looked, trying it again with 2 threads instead of 1, and frogging that also. We kept rediagramming the stitch on the white board trying to get the count right. Everyone had a problem.

Yesterday I sat down. Followed the instructions to a tee and it worked wonderfully well.

Guess we all had some collective mental block last June. Too funny. Now I neeed to outline and do some French knots and I'll be ready to tackle the finishing.
Posted by Donna at 8:09 AM No comments:

Brought my darling daughter with me. Had fun. Cursed at my previous miscounting that I was compensating around on my piece. But I did finally finish the part I was working on yesterday around 5:00 p.m. Nearly ran out of that fiber, too. Now it's back to the part I frogged 'cause I didn't like how it looked. And soon it will be on to the finishing. Maybe 10-12 hours of work left on this. I should be able to finish my Inro piece before the next EGA meeting at the end of the month. If I don't get totally frustrated by using palestrina knots to join two pieces together. Still gotta ask the designer for permission to post photos.

Took DD to a wonderful little Thai place for lunch. I think the waitress was trying to warn us off ordering the Thai dumplings. Apparently some people expect them to be more like Chinese dumplings. They were very good. But the Larb was terrific. I'll have to remember to buy this for a picnic at Wolf Trap in the heat of the summer. That would be most excellent.
Posted by Donna at 8:23 AM No comments:

There's white stuff on the ground again. And school's delayed 2 hours. I'll still make it to the morning stitch in at the Scarlet Thread. And will take DD with me.

I pulled out my Japanese Inro piece - needlepoint - was a pilot class - again yesterday. I'll have to remember to ask the designer again about posting a picture. She was uncomfortable about this last year before she taught the class. New goal - finish this before the first anniversary of the class which was in June.
Posted by Donna at 8:22 AM No comments:

my lottery numbers but I didn't hear about any big win for the Mega Millions on the news this morning. Shoot. A girl can dream though.

Need to go wake up DD 'cause if we're going to do anything today we need to get going as it's starting to snow. Again????

This has been one strange winter.
Posted by Donna at 8:25 AM 2 comments:

Fortunately last night I finally slept through the night. From 10:20 p.m. to 6:00 a.m. I was going on 2 weeks straight without sleeping enough. Don't know why. I just wake up and that's it. I can't go back to sleep.

I feel like I've regained some functioning abilities. I was dragging pretty darn low yesterday afternoon.

So between that and DD being home for spring break, no stitching. She, unfortunately, has a cold. Which she'll most likely leave with us.

I did buy her a cross stitch piece for her birthday - Who Knew Designs which are distributed by the Picture This Plus people. "Ocean's Daughter" can be seen here - http://www.picturethisplus.com/html/who_knew_5.html

I think the picture doesn't do it justice. The fiber is Bejeweled by Crescent Colours. I'm still waiting on the fabric.
Posted by Donna at 8:34 AM 1 comment:

Jet Blue is apparently having more problems. DD's flight home for spring break got delayed, then cancelled. Fortunately she has a boyfriend in Massachusetts or she'd be sleeping at the airport tonight.
Posted by Donna at 10:06 PM No comments: